I tested WASM with Lime that I build manually from the source
While I can create Lime dev build that support WASM,unfortunately I could not build the project that targets it.
other build target like Flash,HTML5 are just fine
Help?

I didn’t have this problem before, but the issue should be resolved in the Lime development release.

FYI, I have had difficulty updating the Emscripten SDK properly on Windows. The steps I had to take were:

So,here’s what I do:
I update the Lime repo and pull it
I didn’t change anything to EMSDK as you suggest since I have the latest, I leave as is . (I also use that in par with other tech that currently support WASM, so I don’t want to break anything)
then when I rebuild emscripten I got this:

Previously it could correctly recognize where is emcc. In windows, the location is C:\progrfiles\Emsrcipten\emscripten[version]\emcc

So how to tell Lime so it could recognize the emcc location?

I have not gotten Lime running with Emscripten 1.35.0, it does not support ALLOW_MEMORY_GROWTH using WebAssembly (I believe) and also results in compile errors for me.

If Emscripten is not in your path, then you might consider adding <setenv name="EMSCRIPTEN_SDK" value="C:\Program Files\Emscripten\emscripten\1.37.18" /> to your “C:\Users<user name>.lime\config.xml” file, or whichever Emscripten SDK version you use, but I have not had success on some older releases of Emscripten

Did you also install other things like Clang/LLVM tool?
updating EMScripten to 1.37.18 (without LLVM/Clang) I got this: 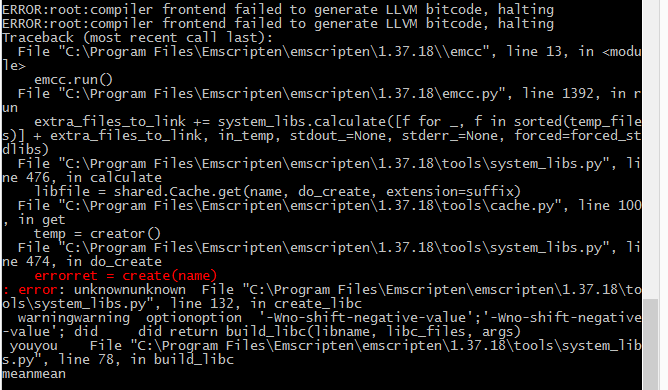 Please make sure your Emscripten base install is properly updated, on my system, the emsdk update command DOES NOT properly work, it reports a permissions error in the extract step. Not manually updating these files resulted in errors when trying to build.

If you are sure those files are up-to-date (use emsdk update and be sure there is no error extracting the windows update ZIP) then the next thing you could try is a -clean build of Lime, but I repeat that Emscripten did not work properly on Windows for me until I manually unzipped the update