has anyone used this extension?
when i load assets it gives me error like this;
Uncaught SyntaxError: Unexpected token ﻿ in JSON at position 0

EDIT: Are you loading a JSON file that has a byte-order mark? That might break the haxe.Json parser

Yes I’m talking about this haxe library. https://lib.haxe.org/p/starling-animate-cc/
I just tried to test if it works and was loading its example files, not mine.

am I doing something wrong? 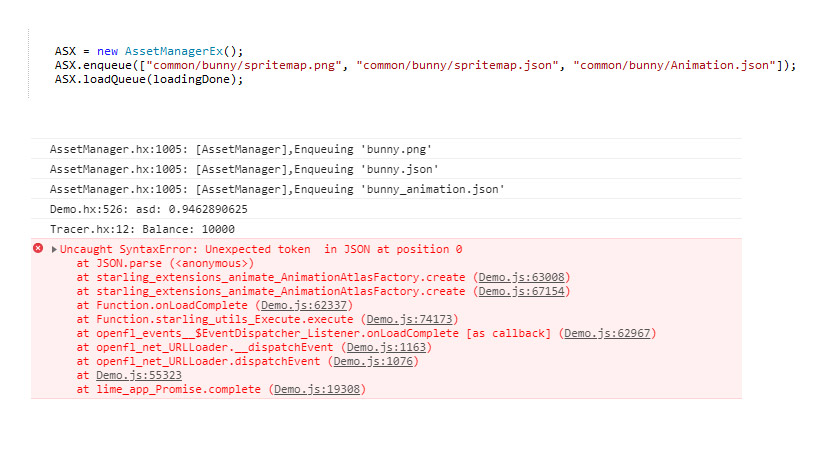 We should have a pretty new DragonBones port done. The error still might be a “byte order mark”, see if you can open your JSON using a code editor, and remove the mark and re-save the file

I decided to load with openFl loaders then add to AssetsmanagerEX.
it now works but cannot get textures (shows animation with white images)

changed spritemap.json to xml and now it works.
is there any other solutions?

It’s a Haxe JSON parse error, so it might be possible to experiment with changes to the JSON (such as making sure there is no byte-order mark) to see if you can get the Haxe parser to accept it

The UTF-8 representation of the BOM is the (hexadecimal) byte sequence 0xEF,0xBB,0xBF. The Unicode Standard permits the BOM in UTF-8, but does not require or recommend its use. Byte order has no meaning in UTF-8, so its only use in UTF-8 is to signal at the start that the text stream is encoded in UTF-8, or that it was converted to UTF-8 from a stream that contained an optional BOM. The standard also does not recommend removing a BOM when it is there, so that round-tripping between encodings doe...

Perhaps there would be a way for the library to detect if the bytes for the text begins with 0xEF, 0xBB and 0xBF and strip it out if needed

I tried to remove BOM, but it didn’t work, the main problem after when i tried to load with another way, was that textureatlas couldnt be generated properly with json. it coulnt get textures and were only white images, so i used exact same names, width and heights, x and y to generated xml file and it worked