Hi there !
I’m glad to show you today what I’ve been working on for a long time :
http://www.abstractpixelgames.com

It’s called AbstractPixel Run! and it has a basic platformer mechanics, but with a touch of generative design.
And a lot of electronic music !

(Here I wanted to embed an image, but I am not allowed to

I’ve been working on it from last summer (not a full time job, of course).

It’s still a beta, and it uses HaxePunk.

Fill free to tell me what you think of it !

I noticed though that sometimes I would sort of hit a spot where I had run out of platforms. Fortunately I could wait for things to recreate themselves, but not sure if that is intentional, or I was just going too fast

absolutely amazing.
very good job, fun and well designed.
it needs a little bit of polishing on the platform generator/mover since sometimes you find nothing ahead.

I really appreciate also the website which totally embrace the game visual style.

(I have just implemented an online score system based on percentile, if, and only if, you are interested write me a pvt, I would like to know your ideas of implementation to compare with mine)

And you’re right, the platforms genration needs a bit of polishing…
(although my friend Charlotte hit a score of 207000 last night !)

At the moment there are 45 platforms randomly positionned on a 3 screens wide scene.

In order to avoid being stuck at the right end of the level (if you go too fast), I already tried a few things :

It would give me a wider playground, and at the same time reduce the chances that uge gaps appear.
I’ll try it as soon as possible

You might also consider a trigger, that if you advance to a certain X value before the next revolution, you silently (and invisibly) generate another set of two screens ahead, “as if” it had always been there – it’s off-screen so the user doesn’t know the difference

Good idea…
Like entering the third screen would silently re-shuffle the first one at the end.
It would avoid seeing a part of a platform disappear, as some platforms of the first screen might overtake on the second screen… if they are big enough.

I’ll think about it, but it seems a good guess…

some times the platforms when changing would actually knock me before they had. didnt knock me off

I beta tested it at an indie game festival in France, and was able to update it to achieve a good balance in progressive difficulty.
Now the challenge is progressive, which was a big deal for serious/hardcore gamers and speedrunners.

Last step will be to add a real scoreboard, and maybe a multiplayer mode.

Just for fun, here’s the cab used to show the game during this event : 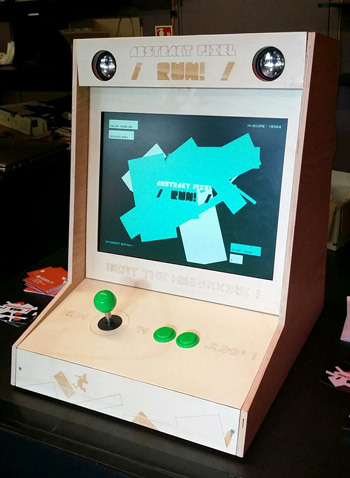 Homemade stuff, and laser print/cutting on the front parts.
Some people wanted to buy it !

very nice. what are you runinng the cab on?

It’s a windows 7 desk computer, it hardly fits in… but runs well.

i think if openfl goes towrads also using the raspberry pi [which it should], then that would be a cheaper option, plus much smaller

Yes, it’d be great.
Are you saying it’s not the case yet ?
I already wanted to produce windows builds of stuff to try it on a raspy 2… and was wondering if it had a chance to run (not my game but smaller things).
It’d be very usefull to show little things in exhibitions context, and to build tiny cabs !

from some things ive seen and chat back and forth with @singmajesty - he is interested in this. one, because its a cheap alternative. 2, his kids can code in it

so it more than likely will be going that way as well as the other great things.

guess its just time more than anything. but from how things are being very well put together in every aspects ive seen, it could be soon. though not next week mind