Hello my dear people who stand up till 3:00AM debugging and drinking tea!
I’m going to be as less verbose as I can.

I’m trying to understand how to apply the concept of scenes (aka states, I prefer scenes since we have a stage… so…), manipulating a camera inside of a scene, and how they correlate to each other in OpenFL.

My current system is laid out as following: 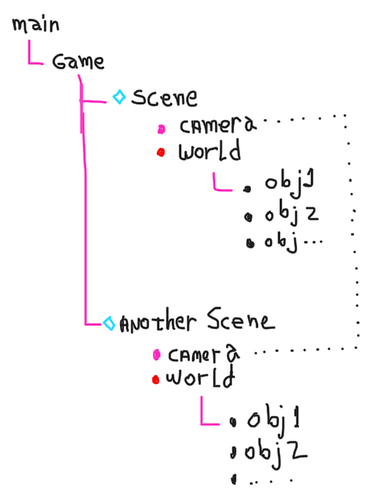 I’m not really sure if this is the best or at least a proper way to handle scene hierarchy in OpenFL. I’ve read a few snippets from random posts and some of HaxeFlixel’s code, and… nope. I still don’t get it.

Also because for my lack of understanding on OpenFL in general, I’ve found myself stuck with “making things scroll”.

For scrolling:
• Should I be copying the pixels from the world and placing them on a camera bitmap?

• Should I really use scrollRect for this or maybe move the world sprite instead?

• What about zooming, when scaling a sprite it’s scrollRect’s size gets smaller with it. I tried a few hacks to equal it’s size to the window size, but without success. What is the OpenFL way of doing this?

Alright peeps, I lied when I said I wasn’t going to be verbose, but I have so many doubts and so little resources that I see no other option

If you’ve made this far, here’s a reward:

This may not seem kosher, but why not “move the world” instead of copying to a camera?

You could scale or change the position of your world Sprite in order to make it work as you expect. If you have a distinct Camera class, perhaps it could control the position and scale (or possibly a scrollRect instead) for the world Sprite

Copying to a bitmap will happen in software, losing hardware acceleration, which may end up making things much slower in the long-run

If you use a scrollRect and not just x/y, you might also consider doing this in a parent object, and not on the object itself