I want to rotate a Tile of my Tilemap around its center point, instead of its top left corner.

I tried some calculations with Sinus and Cosinus, but no luck… I also found that some people were talking about Matrix, which I don’t know what it is, but maybe that’s the solution?

If anyone can help me or at least point me in the right direction, I would be greatful.

There are a lot of examples in the internet. Here is solution using matrix: http://stackoverflow.com/questions/15789168/as3-rotate-an-object-around-its-center-point . This is AS3, but the point should be clear. There are also other ways, including trigonometric.

Thank you for the reply!

It almost works. The tile starts rotating around its center, it starts floating a bit up, then stops, then move up again… It keeps like this infinitly. Here’s my code:

I have smilar problem

I created TileEx class and use it instead of Tile. I added width and height to id, and tried overwriting set_rotation

But that doesn’t work at all.

My situation’s also with a Class that I created which extends Tile.

Maybe I’ll try to work with that instead of continue fighting with Sinus, Cosinus and Matrix!

Or maybe someday they’ll add a way to choose the anchor point to the OpenFL Tile class.

I think this is worth trying. Let me provide a couple diagrams to make all of this easier to visualize. 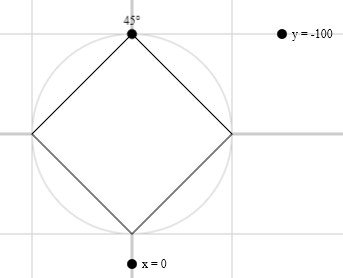 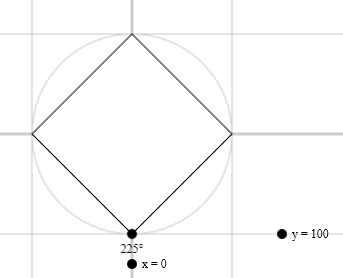 (This is nothing new; I’m just illustrating your post.)

Same with X at the two other angles you mentioned: 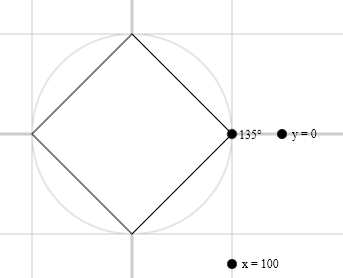 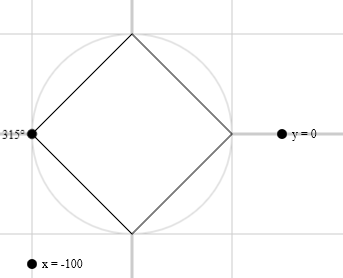 What X and Y values does the square have at 0°?

Thank you for the visuals! That’s better than the squares I drew on a piece of paper.

I found a solution! It was simpler than I thought…

First, when the tile is created, you need to find the hypotenuse using the Pythagorean theorem:

Then, using Sinus and Cosinus, we’re able to find the center point that we want and compare it with the values of the last frame:

I added 45 to the rotation in the equation, because at 0°, the sprite is inbetween 2 axes.

Just be sure that you have the good width and height of your sprite! That was one of my many problems…

EDIT: For visual explanations, see the posts below!

Glad you figured it out! However, I had a whole thing planned, and I’d like to follow through. 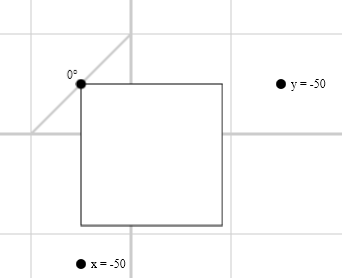 That square is off-center!

The halfway point isn’t what we want. It just isn’t. We want our square to trace out a circle as it rotates, not a straight line. (I actually drew this circle for you in the examples above. It’s faint, but it’s there.) 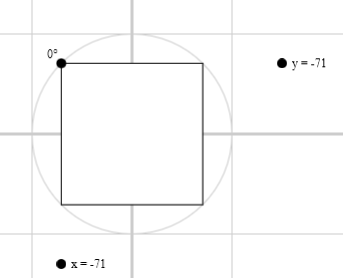 See how it’s aligned with the circle? Also notice that neither x nor y equals -50.

To get a better sense of how it follows the circle, check out this interactive version.

There’s a new (initial) implementation of tile.originX/tile.originY for OpenFL Tilemap

Would be happy to hear feedback on the property name, and how it works for you guys

Thank you a lot player_03! That’s a great explanation with great visuals!

I can see that saying that the coordinates at 0° is halfway is wrong. Well… it’s halfway on the circle though!

And singmajesty, thanks for the informations! Always nice to see that OpenFL is always leveling up!

I’ll test it when I’ll have the time for sure!

I can see that saying that the coordinates at 0° is halfway is wrong. Well… it’s halfway on the circle though!

Yep. The angle is halfway between “up” and “left,” but the coordinates are slightly off from halfway.

So the final question is you have to ask is, if it isn’t following the obvious formula, what formula is it following?

This is another reason the “halfway equals halfway” strategy fails. It would spend exactly the same amount of time in each green area, and we need a formula that doesn’t.

Any guesses as to what the correct formula is? Click here for the (perhaps unsurprising) answer.

I can clearly see the equation that I found on that gif! I’m calculating the hypotenuse of the triangle, which is the radius of the circle, to then find X and Y with Sinus and Cosinus.

Those drawings and gifs are a little bit better than my pen and paper!

By the way, I’m planning to turn these posts into a blog post at some point. Do you think there’s anything else I should include, or any parts I should skip?

The only thing I’m thinking is maybe add a concrete example with a sprite. In this example, you could put a triangle like in this example you shared and rotate the sprite calculating its X and Y.

And I don’t think you should skip anything. There are a lot of good informations!

@player_03 have you complete example how you implemented it.
I have project where I need center rotation

The math should work the same. If it won’t display angled text at all, that’s probably an issue with the platform, not with the formula.

What have you tried, and what happens when you try?

am I missing something? and what is number 45 degree?