I am trying to get a single line of code to parse before it then gets executed later on the JavaScript layer.

I am getting two errors (the latter being the confusing one) in Chrome console:

The code in question is this:

I’ve tried both the single and double quote speech marks, but neither made a difference.

It’s obvious to me that the HScript parser is incorrectly providing the wrong positions in the error message, and I’m trying to figure out what’s wrong with that code. Any ideas?

Would the HScript parser behave differently with line breaks?

The way my engine works is it parses information line-by-line, so the interactive story engine parser might parse something like this:

I will test the same line of code in a simple project and see if I get the same error, then I can try and boil it down.

I’ve tested the same code (in addition to a trace call) and put it into another basic project.

This is the results as executed and expected:

I removed the interpreter execute part and get the following results: 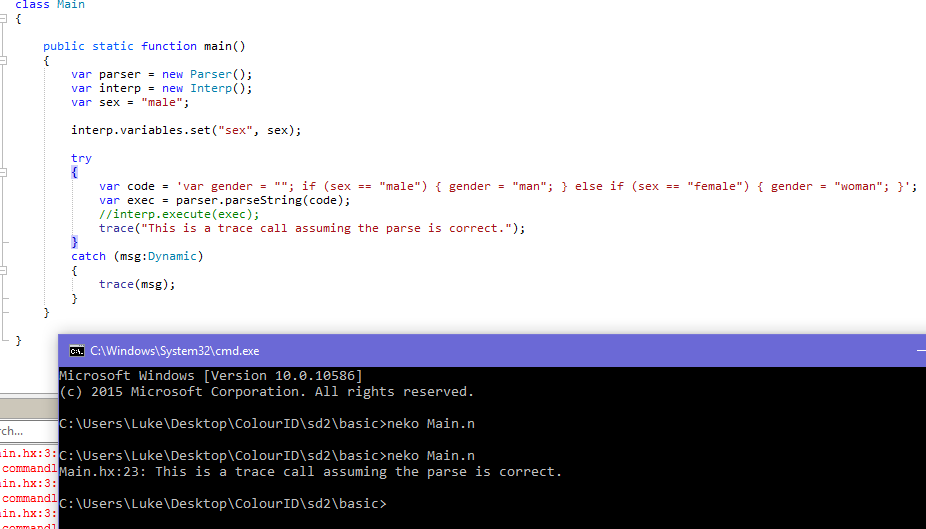 So no, hscript seems to handle one-liners quite well, so something in my project is causing this error but I’m unsure what.

EDIT: The same basic project also works in my primary target, JavaScript. So not a target-specific problem.

Nevermind, it was part of another line, just wasn’t obvious at first which line it was on my script.