We have gotten reports of regressions in both performance and functionality that occurred after OpenFL 8.9.1 when we made changes to the renderer, TextField and some filter changes.

We integrated these changes into OpenFL, expecting that these would be stable incremental steps as we have undertaken larger performance optimizations and feature changes for the next major release. However, with OpenFL 9 needing time to mature and develop and the desire for the releases to be stable, we are making a new release with additional feature fixes but with some of these internal changes reverted.

I’ve created a v8.9 branch which can be used to pull in changes for the stable 8.9 series of OpenFL while work continues on the develop branch for OpenFL 9.0.

Please help us test this release and let us know if you still see regressions. Meanwhile Lime has been released, which includes some important changes for high DPI on macOS, root path values on iOS and other stability improvements.

I’ll have more updates in the future on 2020 and our continued plans for making OpenFL solid, fast and a worthwhile platform for both porting old Flash content as well as developing new content!

Thank you! I was waiting for this updated and was like loosing hope already…

I updated from OpenFL 7.2.0 and came upon 1 new bug with htmlText formatting (see how the word “link” is colored and underlined). 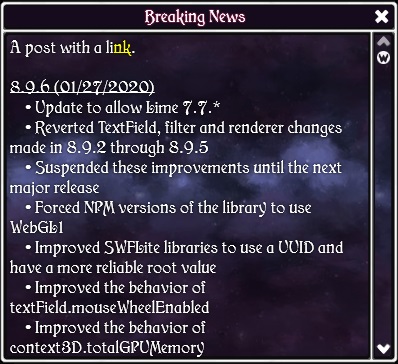 You can reproduce the bug with code similar to this one:

There’s also an old bug remaining with text scrolling (regardless of numerous fixes to scrollRect). The text on the screenshot is located in Sprite container, scrollRect property or which is changed for the scrolling effect.
In 8.9.6 scrolling will only happen if the mouse cursor is over the Sprite! If it is outside the container’s borders, the scrollRect values will still change, but no visible scrolling will occur (something with text renderer not updating?).
This is only the case for TextFields, scrolling for other objects in the container (like Bitmaps) will perform normally.

And regarding the formatting bug: this commit is what broke it.
Specifically this code:

hello, does anyone know if the compilation to webassembly is in the openfl roadmap?

We used to support Emscripten and Web Assembly but stopped trying to maintain it because it kept breaking, was very difficult to debug, slow to build and actually slower than vanilla HTML5 output.

Hello @singmajesty, I know there have been starts of wasm compilers and other player to replace that of Adobe, demos showing a certain efficiency because the webassembly would be machine code … there is the Ruffle project written in Rust, but, they are still far from the end, I don’t even know if they started the AVM2.

I don’t understand Haxe well, it is said that it can compile to other languages, it is rather to transpile in this case, if haxe has its own language, why can not we directly create a haxe project, but that we should use a sub-language like C ++, JS, OpenFL, …?

WebAssembly has theoretical benefits with the following caveats:

Haxe does compile directly to C++ and JavaScript, so a Haxe-based project for the web can compile to JavaScript (which gets anecdotally better performance than hand-written JavaScript) and has been compiled to WebAssembly before through C++.

if haxe has its own language, why can not we directly create a haxe project…

This is what many companies have done:

A dive into how FlowPlay converted their AS3 codebase to Haxe and ported Vegas World to the web and mobile.

Future-proof: InnoGames masters the leap from Flash to HTML5 with “Forge of...

With the planned end of support for Flash and the removal of the plugin from all browsers slated for some time in 2020, Battle Pirates needs to evolve so

I don’t know much about javascript and emscripten. But is it possible to have a c library ported to emscripten and use it in a normal haxe to javascript game ?

Sure, anything you can write in JavaScript you can include in a Haxe/JavaScript project, including calling out to an Emscripten-compiled script. In fact, OpenFL uses an Emscripten version of zlib for handling compression

why can not we directly create a haxe project, but that we should use a sub-language like C ++, JS, OpenFL, …?

Just to clarify, OpenFL isn’t a language. It’s a framework built in the Haxe language, with similarities to the Flash API.

This is patched in the development version:

Sorry for the trouble! We recently made updates to a newer SDL library version and need more time to test it before we’re ready for a new Lime native release

Thanks! Good luck in your work!