I just update openFl(5.0.0) and lime (4.0.2). I create new project in FlashDevelop and get following error:

It’s hard to read the screenshot, does it say version 3.5 is required?

Does your project include any other haxelibs, which may specify an exact version of OpenFL or Lime, rather than using the versions set on your system?

This is workflow of error: 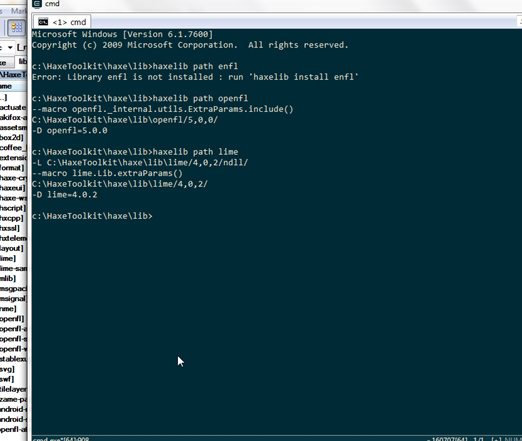 I also tried to compile some of my old project in HaxeDevelop and get same error.

OK, It’s my fault. lime should be 4.1.0 and it wasn’t set automatically after upgrade.
It’s compilable in both FlashDevelop and HaxeDevelop

Unfortunately I am going through same issue, I have a fresh copy installed and lime is by default installed 4.1, everything is new… strange that still openfl sample throw the same error:

I installed Lime 4.0.3 and still no luck

This cycle of errors can occur if you have something such as:

First OpenFL (latest) is pulled in. The version check passes, the tools record OpenFL as version “5.0.0”

The second (older) OpenFL is pulled in. The version check does not pass, because the tools still have “5.0.0” recorded as the version, which fails the older include.xml version check

The next version of Lime has a warning (and fix) for this multiple import problem, as well as smarter “wildcard” version imports for OpenFL pulling in Lime, which should help

I am attaching screen for reference, I think something is wrong… 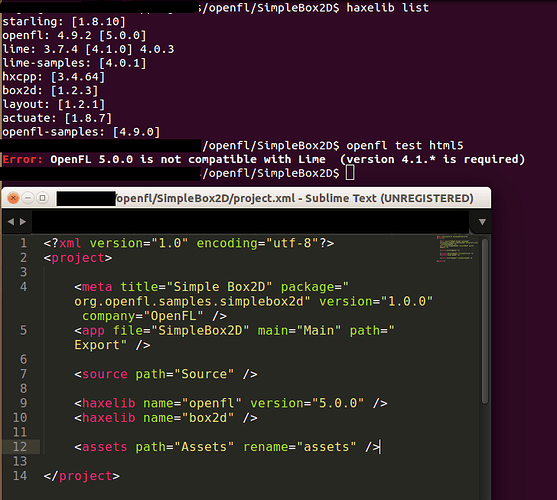 What does haxelib path lime return?

I started receiving this similar error since lime 5.0.0 and openfl 5.1.0 too

everything was building fine before. Im using haxe 3.4.2, on windows 7

Still the same problem. Once I see that error, even if I downgrade to the previously working versions of lime and openfl, I have to reinstall haxe to get them working again

Could you try two things for me?

…depending on where Haxe is installed, and see what they return. Thank you!

This information will help us fix this feature for future releases. In the meantime, you can also install the OpenFL 5.1.2 release made today, which uses the older style of including Lime in order to avoid this problem

Here are the two messages

Edit: If I change the second commands version to 5.0.2, it returns the first result also.

Have installed haxe 3.4.2 and haxe version request is gone, but there are different issues now for e.g.