Apps built with the latest version of OpenFL/Lime are not compatible with Kindle Fire devices anymore.
I guess, it started from Lime 6.4.0 update:

OpenFL 8.2 has been released! Here’s a list of recent changes: OpenFL 8.2.0 (06/01/2018) Updated to Lime 6.4.* Updated file-saverjs dependency on NPM to file-saver Updated to avoid implements Dynamic since it is being removed in Haxe 4 Added ES6 modules (as an alternative to the default CommonJS modules) Added openfl.utils.setTimeout on NPM-based builds Added openfl.utils.Dictionary for NPM builds Added Gzip and Brotli min.js files for NPM builds Improved the texture size used for rendering T…

Any ideas how I can switch back to armeabi-v7. 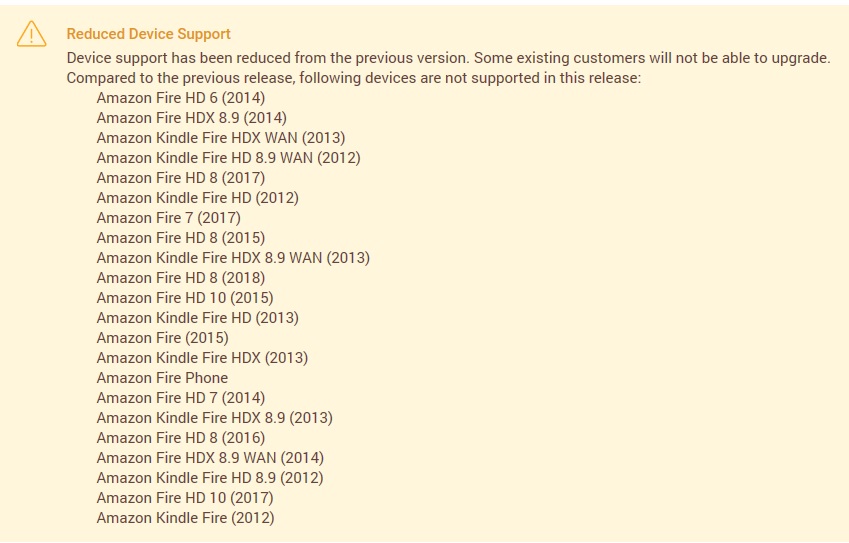 I just found a minor issue:

Minor AndroidPlatform fix when using ARMv5 or ARMv6 only

changed 1 files with 1 additions and 1 deletions.

You should be able to go into your output directory and delete the “armeabi-v7a” directory yourself.

We used to use “v7” only, but this was deprecated a long time ago by Google, and was basically a broken behavior in Android 4, I believe. I had expected that including the “armeabi” binaries would cover it, but perhaps not for Fire devices

Ok, I have found the problem.
My update has lower build number, this cause Amazon to make it “incompatible”.
This is not Lime problem.