Infinity - To The Top

I’ve just published my first android game to the Beta section (i’m just tracking bug). I’ll be glad to have some reviews from you !

It’s an addictive shoot’em up, the goal is simple, do the best highscore !

Infinity - To The Top (Android)

Infinity - To The Top (Flash) 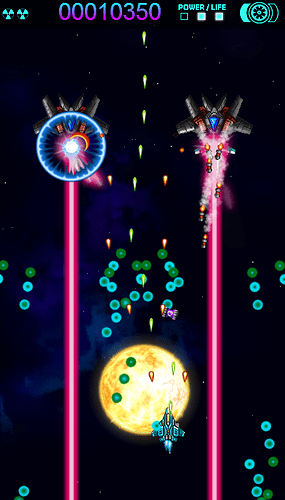 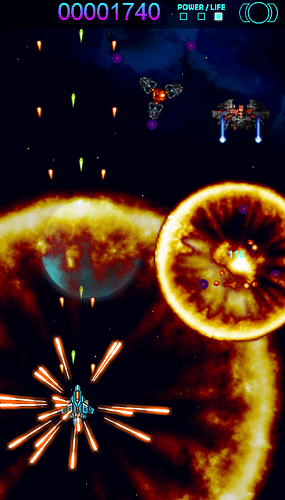 Some big news, i’ve a uploaded a flash version of the game, it’s here ! So everyone can test it =D
And a new version for the mobile (same as the flash version). With big new features and more polishing :

Are you planning to add some sort of progression system (levels, bosses, story, achievements, and/or upgrades)? Players will generally put far more effort into a game when there are concrete milestones.

This isn’t exactly a rational impulse: limiting the length of a game can actually make players play longer. For instance, a p- er who’d normally give up after 50 kills might keep playing if 100 kills was the victory condition. (And winning unlocks endless mode, of course.)

But that isn’t the only thing that players will want. They’ll also want upgrades or unlockables that make the game easier. Yes, players get better over time, and yes, that can be rewarding. But to many, that doesn’t feel like enough. They don’t feel confident that they’ll be able to beat a challenge just by practicing, and they’d rather have a guarantee that spending more time will let them beat the challenge.

Though since saving up for an upgrade takes time, and since players improve over time, they may end up beating the challenge before getting the upgrade. This doesn’t change the fact that the upgrade’s existence motivated the player to stick with it.

You don’t have to add all of these things, but I highly recommend adding some of them. Without them, I’m afraid that a lot of players won’t give the game much of a chance.

Thanks for testing player_03,

I’m totally agree with you !

Firstly, i’m not planning to add any “consistent” bonus between parties, like you said the only way to improve the score is by practicing. In 5 minutes of play (time of a party) you can do as much as the best highscore. I know this game will not go very far, i’ll be glad if some players play a lot doing their best making insane highscores, it will be at the cost of losing half of the players or even more. But the game has an other pupose.

Actually this game is the first of a series, before the “big one”. It’s like a prototype of the core, in order to gather reviews and recommandations to improve it. For me it’s a sandbox, so i can praticte OpenFL, publishing etc.
I have already spent a lot of hours (months…) on the big one before To The Top, it takes a lot of time to build upgrade, quests etc. it gets harder and harder to continue, the motivation is decreasing, so i decided to make a small version, fun enough for me to work on and for the players.

So for the moment it’s like a 2042 game. And this first step sends me a lot of ideas for the upgrades / quests, it’s totally worth it =D

Seeing your game Run, it’s a good idea to show “Level X” while the game is never stopping. It can be nice too in my game showing the difficulty increasing.

And this first step sends me a lot of ideas for the upgrades / quests, it’s totally worth it =D

The first version was a bit (too) difficult, without enough lifespan. I have worked a lot on this to bring more fun, and it’s done ! Upgrades, leveling, and more enemies.

Integrated some ideas of you player_03, many thanks, multiple level shield (deflects one bullet every x seconds) from level 2, the protecting device.
I love the idea of an endothermic reaction, but i’m using actuate path for the ships movement, i don’t see how i can slow the actuate, any idea ? 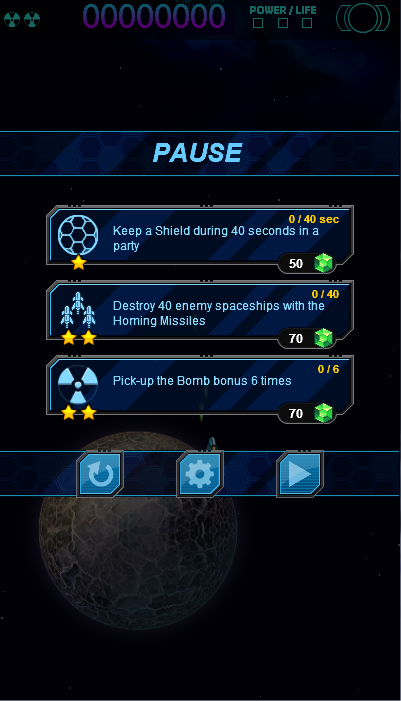 Enjoy the game ! and thanks for any reviews, see you in space

Man, this is awresome. i played the flash version on kong, but why only few have played this?

On most sites, you only get one chance to make a first impression. Since this game wasn’t very popular when it was first released, the update isn’t getting as much attention.

Kongregate has a few ways to draw attention to old games, with badges or front-page features. However, you’d have to contact them and convince them the game was good enough.

@13rice: The game still has a pretty high barrier to entry. Between dying in one hit and not being able to buy upgrades until you’ve earned a lot of achievements, new players will feel like practicing isn’t worth their time.

I realize you want the game to be interesting from the moment you hit play, but new players want a sense of progression.

Probably the easiest way to split the difference is to add an “easy” mode that starts them with extra health, but cuts their score in half and prevents you from completing missions. Maybe it should instantly spawn a power up as well, to give them a little extra firepower.

A level-based mode would be preferable, but it would also take longer to implement.

i’m using actuate path for the ships movement, i don’t see how i can slow the actuate, any idea ?

You’ll need to update two properties of the SimpleActuator. duration is the total length, and timeOffset is when it’s supposed to end. You are solely responsible for making sure they match up. If they don’t match, the ship may jump to a different spot along its path.

Also, since those two are private, you’ll have to tag your class with @:access(motion.actuators.SimpleActuator). Either that or use @:privateAccess each time you want to update them.

An easier solution would be to call pause() and resume(). Obviously this would stop the ship(s) entirely, but maybe that’s ok.

Thank you for your reviews !

Yeah still too hard for most players, needs an easy mode. And like player_03 said, if you miss your first launch, it s lost forever, I took too much bad reviews from the first version.
But I have launched this last version on newgrounds, and it s a better startr, much more views and rate 3.3 of 5 (2.7 of 5 on kongregate).
Got some reviews too, always “too difficult” > bad rate

With an easy mode or lot of classic upgrades it can be 4.
I think I 'll make an easy mode with power up at start, all sec weapons lvl 1, but half score.

How’s your experience on kongregate and newground?? i was planning to upload my first game there and probably to get more feedback…

Both are really usefull, don’t launch your game on multiple platforms at the same time.

On Kongregate there is the scoreboard if you need one, it’s easier to use it than to develop it by yourself

There’s also a chat, publish your game and ask on the chat for some reviews, you can have reviews very fast and some new friends for improve your game. Games seems to be more casual on Kong, it’s always based on upgrade, like you can’t lose if you play a lot and buy all upgrades. If your game don’t follow this template it will not success easily.

For Newgrounds, there’s a judgmement phase before the game comes out. I have much more plays on Newgrounds than Kongregate. And reviews are more constructive. Maybe because I have improved it a lot before launching it on Newgrounds.

So my advice, launch to one unique platform, get the feedbacks, improve it, launch to another etc. ^^

Do you have a link to your game ?

https://www.youtube.com/watch?v=n8i074Sy_wM - HTML5 target…It’s a long way to go. But, anyway thanks for the advice. My first option is kong then newground and so many others…