Dear community, I downloaded haxe-3.2.1-win.exe , I installed it then opened a command-prompt (Windows)

and write this code: “haxelib install openfl” it worked , but later when I wanted to run this code : "haxelib run openfl setup " I faced a problem.

Looks like there’s something wrong in the haxe install. But I’m not a Windows user so I’m really not sure, hopefully somebody else can chime in.

If you run haxelib list what does it show? 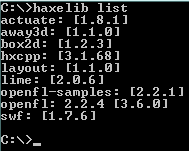 This is what I get.

Try haxelib upgrade, which will update all of your libraries. Then try haxelib run openfl setup again. I hope it works!

Thank you so much.

My Editor of choice aka FlashDevelop says:" it cannot find haxelib.exe in SDK path". What does it mean and how can I fix it ?

thanks for the reply Dear wuprui.
but one of the first things I checked was to make sure the the Haxe SDK path was actually referenced properly in Flash Develop.
It is indeed correctly pointing to my …
C:\HaxeToolkit\haxe
… directory, where haxelib.exe lives. That was the default directory that was created during the install.

http://puu.sh/jMQyV/cd2efbedb2.png is what I see when loading up a working program.

do you run FD as administrator?

One more attempt: if you have installed haxe manually try to uninstall and let FD install it himself. Tools/Install Software

I did what you suggested, It did not help 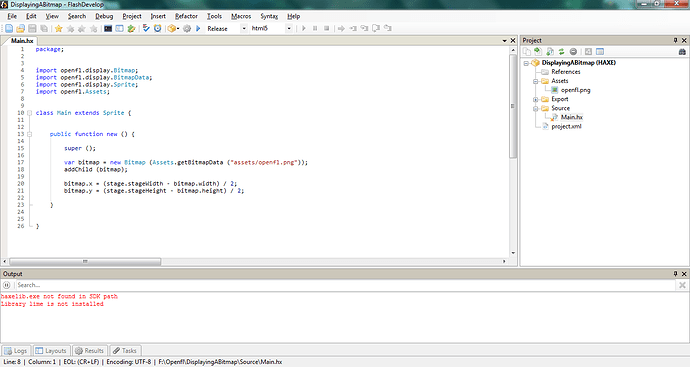