I have been testing Haxe 3.4.2, and it appears to work properly, which is great news!

However, I have serious problems with the official 3.4.2 installer on Windows. I experience intermittent compile errors, and sometimes haxe.exe crashes during compilation

Is anyone else testing Haxe 3.4.2? If so, which platforms have you targeted successfully, and what operating system are you running?

Could anyone see if the Windows issues I experienced occur elsewhere?

I’m using this version on 64-bit Windows, but I haven’t seen anything like what you described.

Edit: though I’m not using the latest version of OpenFL.

Edit 2: I used the official installer.

Did you use the official installer, or a development or build from source?

Haxe 3.4.2 is working great for me at the moment. It seems to be the first stable working release i can actually use with the official installer since 3.2.1. (So far)

The first time I installed, I have some issues compiling to Android, so I removed everything and did a fresh install of haxe and OpenFL and everything is running fine.

Testing with it, one compilation stopped pointing to a value I believe related to waud.js, a lib that wasn’t even being used in the haxe develop project in question. Happened just once. Subsequent re compile ended ok. Target was flash.

But caseShadow is not working. I have tried.
PS: Thanks for fix and release new version of Away3D. I thought Away3D died. But BabyLonHx is holy shit because it has always conflict like failed path or wrong function. I throw BabylonHX to waste.

I really want know why does Away3D not show shadow effects. I always tried different method of ShadowMethods like SoftShadowMapMethod and FilterShadoweMapMethod And nothing works show with shadow-effects.

Example. shading from away3d example 5.0.1 I added like before old version of Away3D 1.1.2 Old version has no problem. Now it happens, no shadows?

Thanks Please check correct if you use ShadowMapMethod and caseShadow if they are working.
PS: I am using new computer AMD Radeon RX 480 8 GB , VulkanGL 1.1

Do you think Away3D 5.0.1 doesn’t support for my new display card? I tried show log of command. nothing shows any errors… I am using Windows 10 Pro x64.

The Away3D samples would be a good starting point, a couple of the “Load” samples (“LoadAWD” or “LoadDAE”, perhaps) have shadows, such as the ant or the rocking horse.

These shadows appear to work properly, but perhaps there is a feature that still is not in full working order. If you can make a simple reproduction case, either from scratch or modifying an existing Away3D sample, that would be helpful so we can see what you’re seeing

@singmajesty Hey my dear I have tried. But it doesn’t work for Windows, Mac and Linux ( native CPP )

For Flash and HTML5 are OK

For native cpp and neko are failed. because shadow looks common. like this. 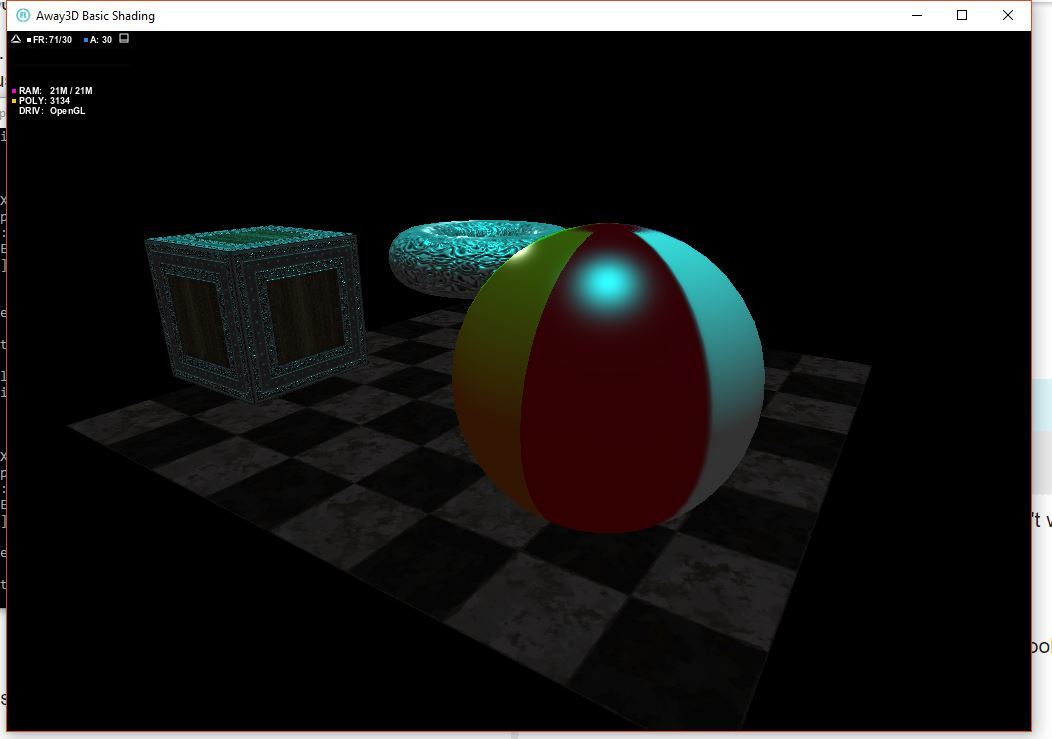 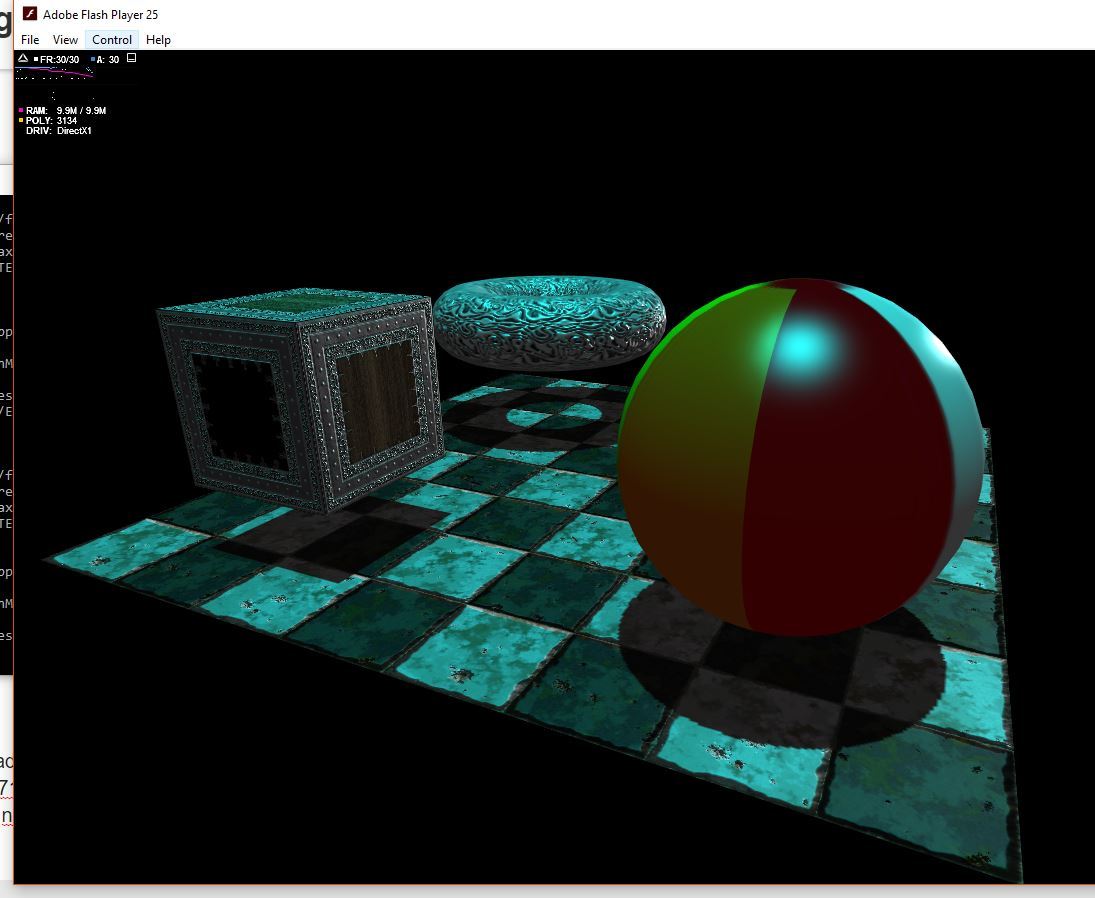 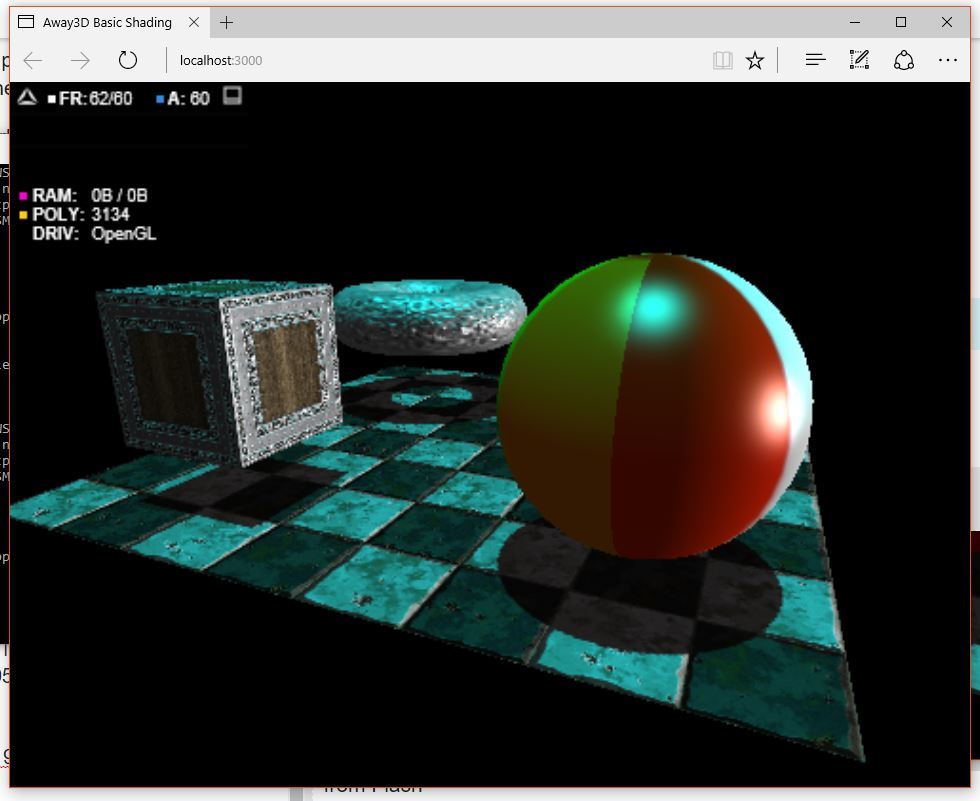 Thanks for the screenshots,

This appears to be a regression – I believe this worked before. I’ll look into it

You know I am surprised because Bullet Engine is great and can work with Away3D like old version of AwayPhysics - AwayPhysics is died and Bullet is now. Check youtube - It is really excellent solution for mobile binaries ( Android, iOS and Tizen … )

If you’re already to write with Bullet sdk in your lime’s src than compile it and try with OpenFL and Away3D, Starling ( 2D game ). Example if you play tiled game like Supermario for example than you try to play with collision- and physics enginable features… It looks realistic.

Bullet would be great, but will require special work per-platform, C++ bindings on Neko/C++, Alchemy on Flash, and asm.js on HTML5, unless it is ported to Haxe. Sounds like an investment, but could be exciting

[quote=“singmajesty, post:12, topic:8944”]
asm.js on HTML5
[/quote]Why do we need asm.js but BulletPhysics 3 has built-in asm.js ( I think sure )
Just has HTML5 from BulletPhysics

It looks like that demo is designed for using NaCL, which would work only with Chrome. The trick is getting fast performance and running across the board on all major browsers and OpenFL targets

So I installed the Haxe 3.4.2 installer on Windows again, still the same problem, after even rebooting. It’s intermittent, so its hard to spot, but something seems wrong with the Windows installer version

Have you tried with another machine? Somehow it seems like that only happens for you.

I’ve tried with two machines, one even after a fresh Windows reinstall. I also see other issues with a similar issue on this issue: https://github.com/HaxeFoundation/haxe/issues/5986

I use Haxe 3.4.2 on three different computers, all with the 3.4.2 installer… and on all 3 I get strange random compiler errors from time to time… so yes… something definitely is wrong with the installer version.

It sure is, though not getting hit by the randomness as often after a while, it still happens when I hop back and forth with OpenFl and Lime versions… it is like it knows…

If you guys wouldn’t mind backing me up on:

I would appreciate the support