Has anyone got HIDE editor to run OPENFL code or any code?

think the title says it all

but i have been trying out HIDE. looks interesting, has some nice features, shame it looks like its not being developed anymore though.
but im running into something strange. on running any code, being HAXE or OPENFL. it just doesnt. no matter what

now i am running into error messages, but on checking and having the required things, like the project.xml plus having things set right, it isnt working.
just wondered if anyone has gotten it to work?

i have posted on the github about this, but no reply as of yet 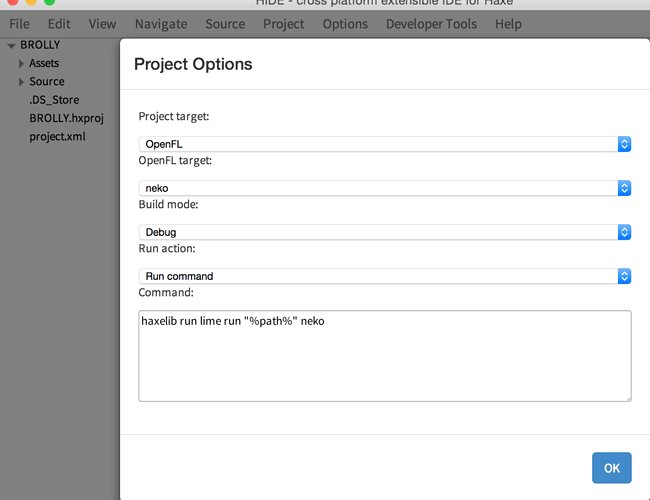 Not sure I have

from the looks of it, its not going to be carried on. which is a shame, because its a HAXE ide made with HAXE, and actually does have some nice features too it. just seems like a good thing to do. shame really

anyhow. move onto to brighter pastures. peppermint is really looking nice now. its still got plently to do to really make it to what the sublime build or even what the jetbrains one can do. but hey, thats how it goes

EDIT
i did try jetbrains, with the bundled jdk. but thats just ridiculous on what you have to do. didnt even work in the end. shame

Because I see this error too, and is because diferent upgrades on Haxe.
You need Haxe 3.1.3, Neko 2.0.0, OpenFl 3.4.0. And if work with HaxeFlixel, Flixel 3.3.12 and Lime 2.7.0.
If you use a newer version then HIDE break.
And as is no longer maintained i guess the options are older Haxe or new Editor (like HaxeDevelop).