Hi,
I’d like to know how is the state of the works on the support for tools like GAF, DragonBones, Spine, Spriter etc (if you know others please report here).

There is also an old discussion about it here (tools for 2d skeletal animation), but I think it needs to be updated regularly: dynamic animations are a central part of the game development, and a stable and constantly updated page (reporting the state and all the supported features) in the Openfl site would be very useful for all the new Openfl users and generally to shed light on the current situation, because it is often impossible to find the time to give all these tools a try.

It would be great to have different pages for other kinds of tools too: a nice showcase for developers and above all for Openfl, to attract more and more users who wants to know at a glance what Openfl can do.

Do you think it is possible?

There’s a current DragonBones port under our Github account (and I think it’s released on haxelib as well), I’ve heard multiple Spine ports, but thinking we may need to try and get an official one soon

Open to ideas about the showcase, or perhaps this is something for the “learn” section?

We need to make a new Armature/Factory for DragonBones, designed for OpenFL’s Tilemap API to take advantage of fast quad batch rendering (instead of the slow drawTriangles API)

Does it use Tilemap now or still drawTriangles?

Ah yes, that’s a very good thing to point out – it still needs improvements to the OpenFLArmature (etc) in order to better accelerate its rendering, it should also support Starling currently

Hello, I’m the SpriterHaxeEngine maintener. There is a Tilemap renderer but I’m not sure if it works well, but I will use it in my next tiny project, so if there is something to improve, I will fix it. Anyway, I plan to add new minor features. Also, there are two great features : binary scml to load spriter files faster, and texturepacker optimized format. But one major drawback is the lack of updates in the Spriter software itself (I’ve read somewhere that the next version will be in a very long time). Because of this, I’ll probably switch to Spine for my next big project (2019?) to have the mesh feature…

@loudo Spine looks really great but I would like to stick with DragonBones. For me it really take time “fighting” with all those animation tools.

LEARN could be a nice choice, but this new section would be a different kind of showcase, so it could stay next to SHOWCASE section, what do you think?

The page would be really easy to create, but would require the developers to maintain their projects, adding a description, links, compiling a list of the supported/missing features, the overall progress of the project, maybe the milestones and whatever they want to add to clarify what the project is capable of. If you open the haxelib page and search for a tool name, like i.e. “Spriter” you immediately find the projects, but often they completely miss a description, and someone (like me) could be not brave enough to play the russian roulette and adopt a library that could reveal itself to be buggy and incomplete.

This showcase could also vitalize or even revive interesting projects, and allow the developer to receive support from the new users.

This wouldn’t replace haxelib projects pages, it would be a magnet for new users and a reference for developers that want to easily go through the available tools: if I don’t know the XYZ-program-that-animates-digital-pizzas I will never search for a library that allows to import digital-pizzas in haxelib

Are there a lot of 404 pages? There shouldn’t be any, that I know of

Well there is a deformation mesh feature, but still in beta since 2013…not suitable for production I think so I didn’t add the feature in my engine. Also I’m willing to test the next version which I hope will be more handy and with less bugs, but it seems that we will have to wait some years…The only things that keeps me using Spriter is my engine and some features missing in Spine (actions points, tags…I guess, not even sure).

OT – Now all pages are ok, yesterday evening (about 10hs ago) a lot of pages were missing… maybe a timed process of the server. –

We did just do a server migration. I think after the DNS changed, it revealed some problems with the new server configuration that I didn’t see before the DNS updated on my host. Thanks and have a great day

Does anyone know is .gaf file just ordinary txt/json/xml file and is it possible to read it?
I’m trying to convert GAF/Starling to openFl/Starling but I’m stuck with reading .gaf files.

My guess would be that it’s binary. Are the GAF runtime libraries licensed, or are they free and open?

Well, my source is Starling version (https://github.com/CatalystApps/StarlingGAFPlayer) and it’s under Simplified BSD License, so I don’t see any restrictions.

@loudo maybe ther still hope with Spriter, looks like they managed to push out some updates

Will not believe till will get hands on it but looks promising.

I think we can test it in few days only… I hope it will give me motivation to update the haxe engine.

Yes, I hope it will be great, Openfl really needs tools for complex animations.

1 year has passed!
If you are following this topic you’ll be happy to see some updates

I have just had the opportunity to test DragonBones: well, I don’t know how the project evolved, but I can tell you that DragonBones library for Openfl supports meshes! Please don’t tell me that everybody knew and nobody told me!

There are some glitches compiling to Canvas, 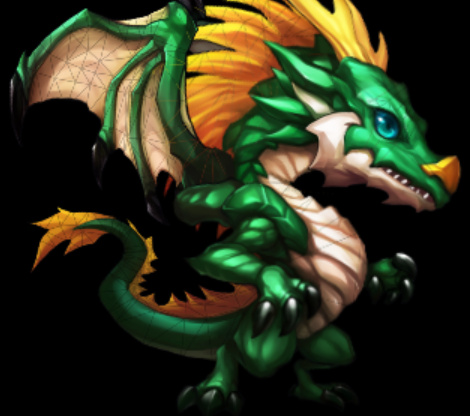 Look at the wings, the head, tail and torso.
You could say “ok, compile to WebGL”, but the tests show that performances are significantly higher in Canvas

This makes me think that if meshes have been implemented for DragonBones it would be pretty straightforward to add them in Spine libs too, right?

Talking performance: How many dragons did you manage to put on screen before dropping fps?