Does anyone know about this native vlc video support unicorn? 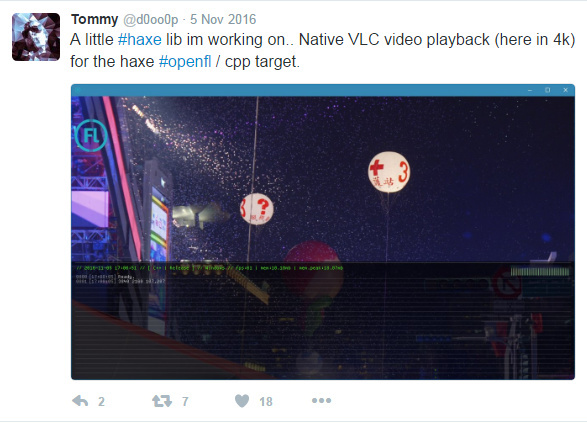 No. Did you try to ask him directly on twitter if his lib was public?

No. Don’t have an account on there.
Don’t even know what “vlc video support” means to be honest other than it is playing 4K video in that shot.
I was just roaming the web for something related to video support on Haxe. Other than flash target.

It probably means libffmpeg integration with OpenFL, I’ve shied away from ffmpeg due to licensing issues

We don’t have MP3 support in OpenFL due to the $2500 license per application requirement it places on users. I have a feeling H.264 (and some other codecs) may be worse

Though I would like OGG Theora or WebM support (probably Theora first because it’s simpler to integrate) on native, or “StageVideo” support for iOS/Android would be nice

Yep, i’m working on a LibVLC integration and externs for Haxe/hxcpp and OpenFL.
Basicly it’s using the VLC libraries under the hood and rendering the output to a bitmap texture in openfl,
so you have a special “videobitmap” that fits nicely in with the displaylist. Its windows only right now, but hope to do osx / linux compability soon.

This is great news, the thing I been waiting to port something I been doing from flash to native windows.
There’s this nasty stutter blank second when I loop stuff in video on flash.
Thanks for the info.

As far as looping video goes, this is directly related to the video implementation on each platform. On flash, there is indeed a stutter when you loop video content. This is because of the video having to seek back to 0 and play from there. The common approach to work around this is to have two video players and swap them when you loop.

Now, in the case of this integration you are bound to the limitations of LibVLC, and you should not expect a perfect loop cycle here either, because some of the same principles still are in effect, meaning the player has to seek back to 0 and play from there. That being said, i feel looping of video works better with libvlc than flash video. Its the same lib thats the base of the vlc media player, so open up a file and set it to loop there, and see if the result seems ok. If yes, then it will probably be ok here too.

Ok, there is a basic repo / testproject up for this now 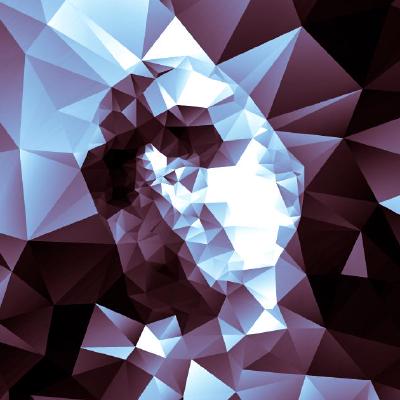 So awesome. Good thing today is a local holiday or I would have to skip whatever.
Thanks !!!