when I run either of these:

both gives me error: 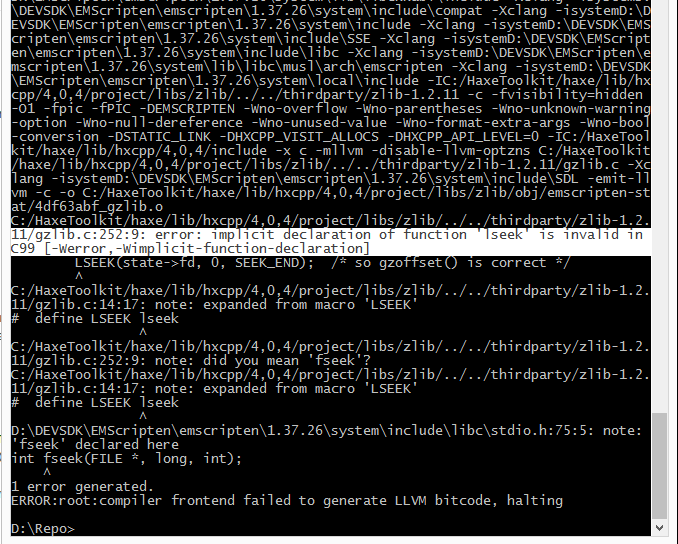 I set EMCC_DEBUG=1 so I could get some info and the problem lies in:
lseek is invalid in C99, under the zlib things as you can see on the pic.

I think this may be a fix recently to HXCPP:

I got another error when building hxcpp with the given patch.
HXCPP_VARS environment variable is undefined.

So I use older hxcpp adn compile works partially.
when emcc trying to get SDL ports, it got error: my internet runs quite fast, no network problem Also I have serious question: why WASM support doesn’t included on official release?

Supporting WASM feels like a moving target. We get support running for one version of Emscripten, then it stops working in the next, or we have difficulty getting the same environment running on a different host system platform.

I have not seen any performance benefits to WASM in my testing (though admittedly, these tests were more GPU- than CPU-bound) but with much larger binaries, more difficult debugging, much longer compile-times and the instability in maintaining support for the toolchain, it was dropped from haxelib releases.

However, I do think that it may be a valuable target in the future, and have no need to break the source compatibility we have so far. I believe our JS HTML5 target is better all-around right now, but some day in the future, WASM may surprise me and it will be stable, fast and the best way to go

ah okay… thanks.
I was curious on WASM with OpenFL, but for now I think I just need to skip it from my list

I think 1.37.1 was the last version I confirmed was working properly

I just tried “DisplayingABitmap” and it worked in both ASM.js and WebAssembly output. It must have been at least “1.37”, not “1.17” like I incorrectly remembered

but we’d welcome any additional word/work on future Emscripten and WASM support for anyone who looks into this!