Everything was fine before, but I’m not sure which versions of OpenFL/Lime I was using.

Anyone has this kind of problems on their PCs?
People, that are complaining, use Chrome 90/91 and different versions of WIndows.

I can’t test myself, as I have no problems on any of my computers.
And I don’t reaaly want to experiment on players.
I need someone with AMD CPU to perfom tests.

I’m interested to test your game or some test app on 5 different computers (2 is AMD - Phenom and Ryzen, 2 is windows tablet pc), but it will require both versions (9.1.0 and 8.9.7) to compare performance…

Nice, thank you!
Here is the version that cause problems to some players:
https://www.pozirk.com/test/

And here is good version, built with previous OpenFL/Lime:
https://www.pozirk.com/all-in-one-solitaire-game/
I have just realised that it was actually built using OpenFL 9.0.2, not 8.9.7.
So, problem start with OpenFL 9.1.0, I guess.

You need to start any game to see, if it’s lagging.
Let me know, what you get!

The game ran very smoothly and fast on all my computers. (AMD Phenom II x4, AMD Ryzen 5, Celeron 4100, Xeon etc.), Windows 10 and Windows 7, Chrome 91 and Mozilla 89. Profiler says, that the “test” version works even a little faster (just a little, maybe due to AD).

BUT! I finally managed to find a machine, where “test” version always works MUCH slower, than “good” version. This is an old machine with Windows XP (it can run Windows 10 x64, but for the tasks that machine performs, XP is more suitable). And yep, it is AMD.

Yes, machine, OS, browser - everything is old, but i think it would be the same behaviour in new OS and browser on this machine, and the fact remains - the new version of OpenFL/Lime/Haxe runs noticeably slower on some machines, no doubts.
This is not my computer, but I often have access to it, so I’m ready to take part in any experiments to find a problem

One of the players with lags has the following specs: 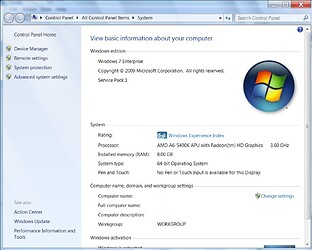 I see lots of modifications have been made to TextField according to OpenFL 9.1.0 changelog.
I will make a build without any text fields tomorrow to see, if it makes any difference.
Thank you Oleg!

Ok, and it would be great to use the same (older?) version of Haxe, if possible. It cannot yet be ruled out that the problem lies with it changes.

Ok, here is no text version with the latest openfl/haxe:
https://www.pozirk.com/testnotext/
Let me know how it works.

Just got to old AMD computer. Works exactly the same as the test version with text. Even a butterfly on the splash screen in both test versions flaps its wings much slower than on “good” version. I still suspect new Haxe itself of this problem… And it scares me because I am using the latest Haxe, but older versions of OpenFL for some reason

Ok, then,I’m not sure what might be the reason.
Can you do some debug in browser to see what causes the lags?
Thank you!

Due to the limited access to the old computer, it was difficult to dig into the problem.
But then I looked into the closet and assembled another computer from about 2012 (also AMD), installed Windows 7 x64 on it, latest google chrome, and yep - the “good” version of the game works almost perfectly, and the test version (with or without texts) slows down terribly.
It is Athlon II X2 265 CPU and GeForce 8200 integrated graphics card.
At the moment, I ran the profiler for different game versions, capture performance about 25 sec, and found a completely different behaviour about “system” and “painting” sections…
Good version: 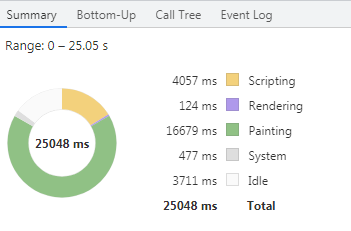 And the test version: 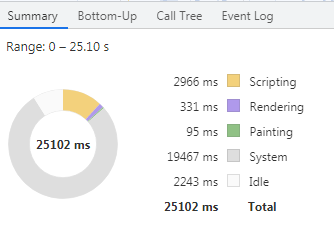 There is nothing interesting in “call tree” sections, scripting itself is fast in both cases, in a good version it just has more time to execute. I have no idea what is going on in the Painting and Systems sections, but looks like browser handles it in completely different ways, and “system way” is much slower…

UPD: Interesting, that it happens in old 49 and newest 91 version of Chrome in the same way, BUT in Firefox all versions works absolutely the same (fast)…

Thanks for the info, I’m as puzzled as you.